Judy Caroline Steinfeldt,  a resident of Coronado Cays and Encino, California has been actively involved in the arts since the 1950s. Early in her career, Judy was a recording artist with Capitol Records.  Her duo, “The Pixies”, was backed by the world-renowned John Williams Orchestra. Judy went on to attend UCLA where she received a bachelor’s and master’s degrees in psychology.  After marrying in 1965, she raised her family in Los Angeles. During this time, Judy began taking art classes experimenting and creating intricately complex artwork using various media including paper making, weaving, collage, fiber art, chocolate and oil paints.  She later attended The Brentwood Institute of Art in Brentwood California where she learned to create abstract acrylic paintings using new and creative methods.

In her current work, Judy challenges the boundaries of art-making and paints on unorthodox surfaces such as LPs, glass, tile and wood as well as conventional canvas. On these surfaces she has experimented using tools such as straws, heat gun, palette knife, spatulas, cups, sticks, and bamboo to move liquid acrylics mixed with various mediums. Some of her artwork has been enhanced with gold leaf and exotic stones such as rose quartz to emphasize the movement in the painting all contributing to her bold, personal style of expressionism. Her work may appear spontaneous and random,which it is to a degree, but underlying all is a carefully constructed visual juxtaposition of balance, chaos and control — an artistic device used by the American Expressionists..  The result is a powerful display of movement and color which illustrates her deep understanding of the beauty and unpredictability of nature and the ocean which inspires much of her work. Each piece is unique and inspiring. She swears the paint talks to her and she responds leading to a piece that is a true collaboration between artist and medium. This is the part that absolutely delights her, the magic of the piece.

Judy has previously exhibited at the Emerald C Gallery in Coronado and has been contacted by the Academy of Contemporary Art in Australia to be “Spotlighted.” She was the featured artist in Leroy’s, Coronado for the month of July 2018. Being chosen for the 2019 Banner Art display in Coronado is a true honor. 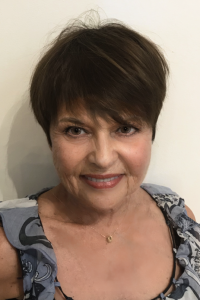